So, I'm playing with some extra black paint from Culture Hustle. It's supposed to be 99% light absorption, so that should mean things - even in bright light -  are very dark. 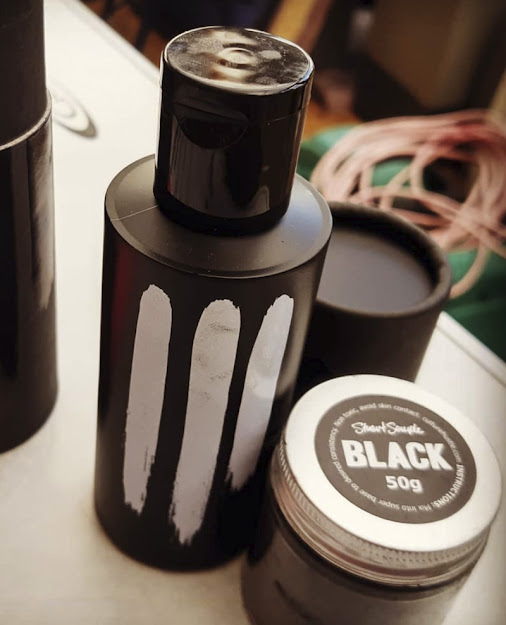 Supposed to be the blackest black. One bottle of version three, plus a small tub of version one; which isn't as black. Initial reactions. How much does the V3 packaging add to the cost, which is already quite high. Fulfillment should Chech v1 before dispatch. Either the lid was slightly loose, or there had been a previous spillage. Pigment all over inside, not huge amount, just enough to get hands really dirty. 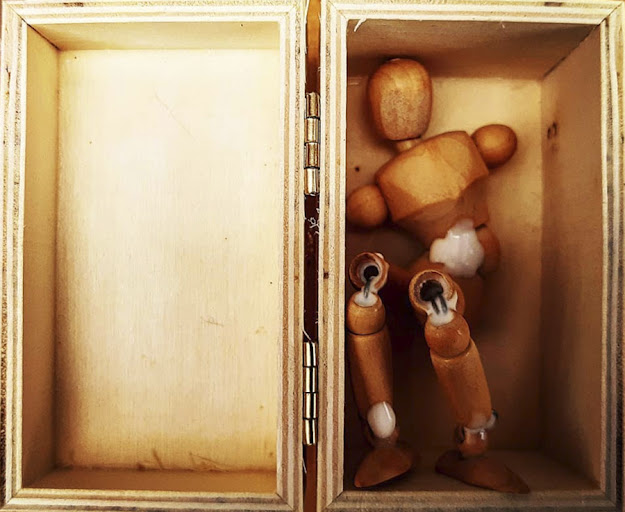 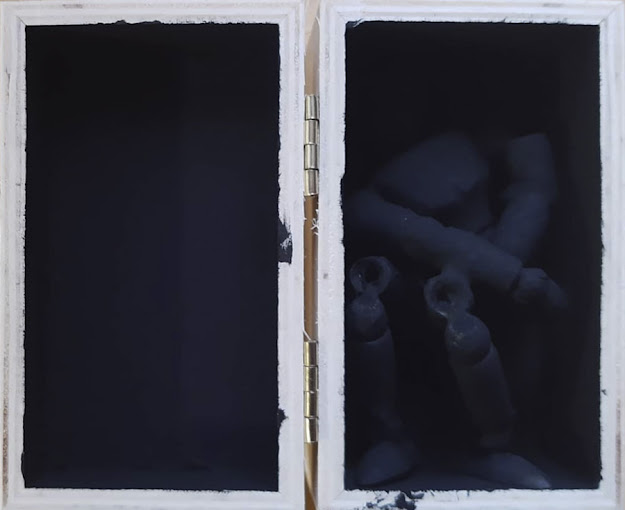 So, the figure has-been painted with oneciat black 1 as a primer, two coats black 3. Dried with hairdryer as suggested. It's 85% successful. Figure is hard to see in normal lighting without moving box. Lid looks like flat area. Positive enough to try version two. This will be the flat version I talked about.
Posted by Steve Spicer at 16:46 No comments: 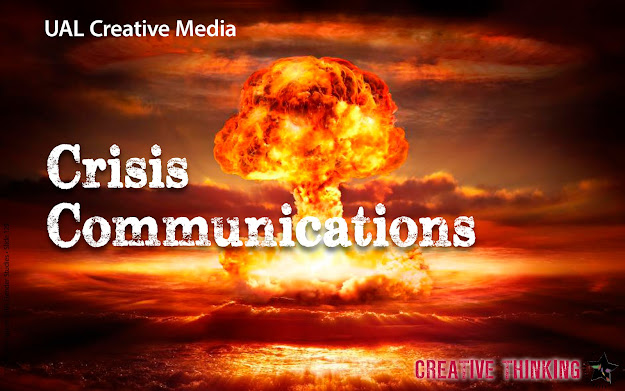 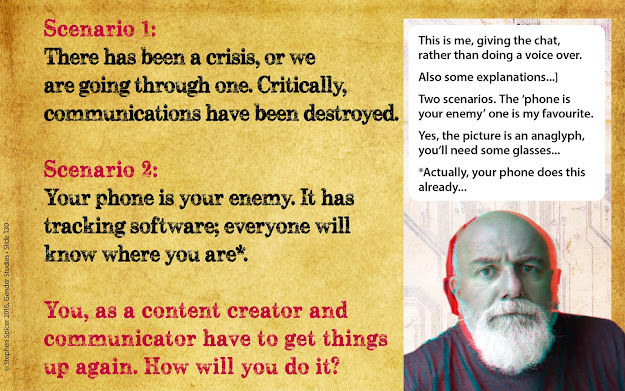 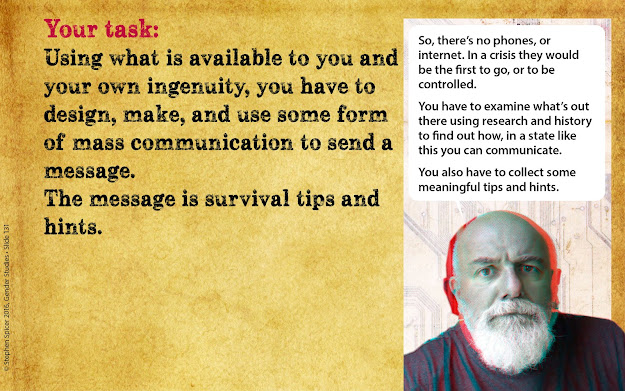 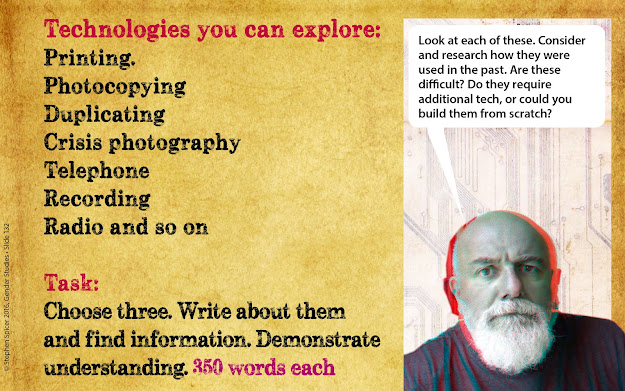 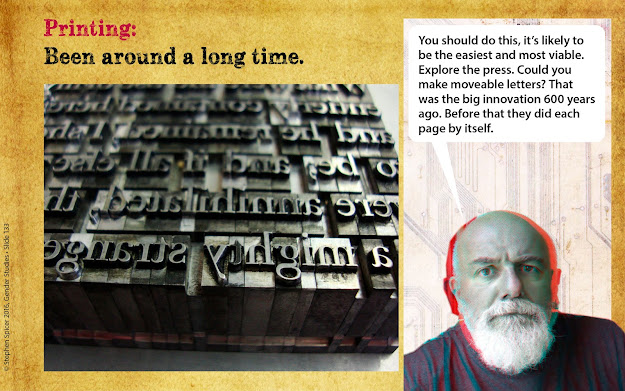 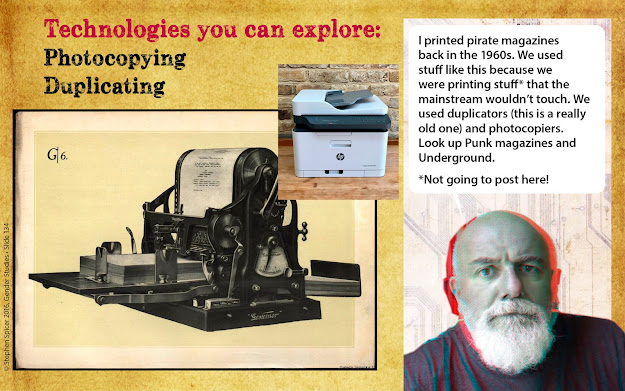 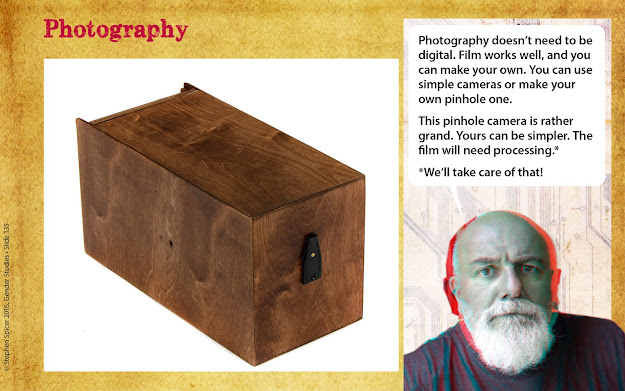 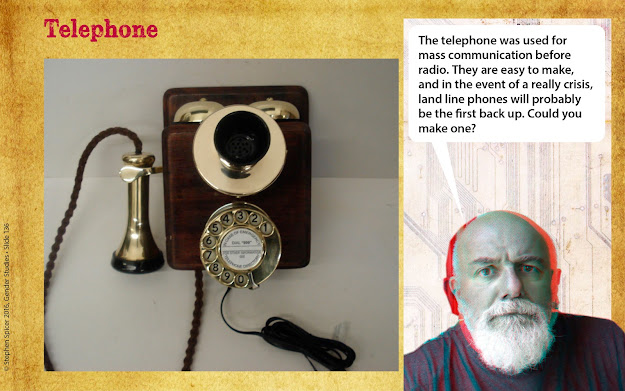 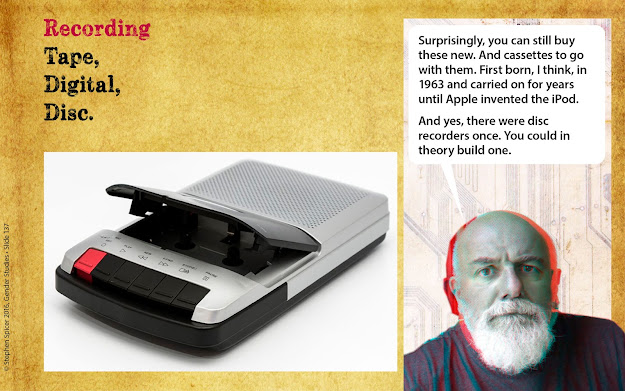 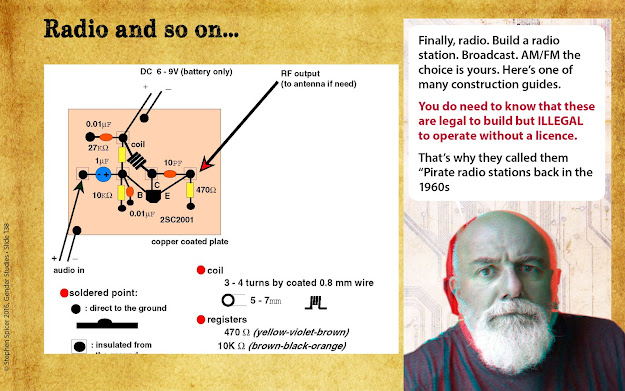 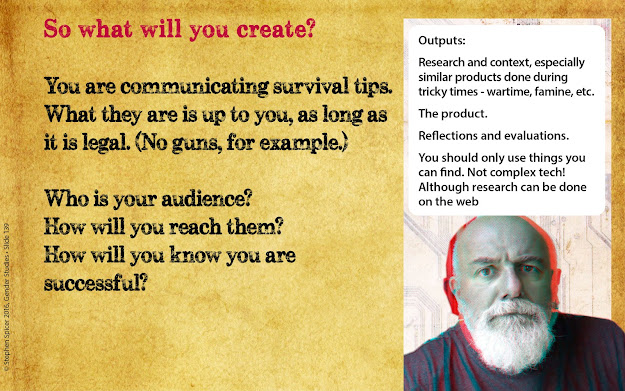 Posted by Steve Spicer at 16:15 No comments:

This is a two part video I made on assembling a larger picture out of separate scans.

Posted by Steve Spicer at 15:53 No comments:

Quite excited about this. Have done a prototype and launched it on website. Little fingers can't type fast enough! Here's the copy:

The Travelling Museum of Speculative Automata
You’ll be able to see working Forest and Caves, Icons of the Isolation and small people. There may be a steam engine to power it all. It’s being built be ready in a few weeks, and as soon as Boris allows us to meet, which should be soon, you can book a viewing. Distance NO OBJECT - although you’ll be asked for expenses if it’s very far! Viewings are estimated to cost £5, orwhat you think it’s worth. Works are not for sale, although you can buy the forest in a non-working laser-cut kit form once manufacturing is available again. It’s going to be great! An art gallery on you front path.
To express interest, please email museum@stephenspicer.com
The image is a a mock up.
To find out more (from 6th) visit www.stephenspicer.com 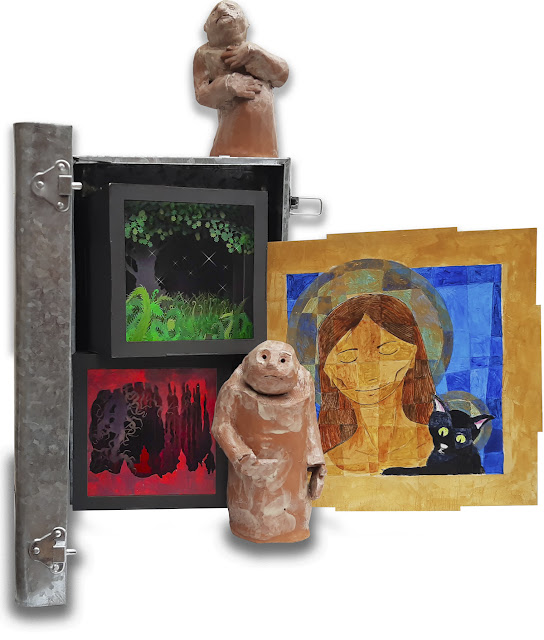 Posted by Steve Spicer at 18:17 No comments:

Had to put together a website for University work. You can see it here. It's done in Wordpress and I'm still not that fond of Wordpress - or any other template driven web authoring process. (I know that Blogger would fall under that heading - but I don't care how the blogs look - much.
Template needed a logo. Instructions were absent, but a bit of experimentation established that it requires a square logo to fill the space.
Since I want to keep it simple, decided to just use text.
That was my downfall.

I was looking for something tall, narrow, sans-serif. Not to angular. In the old days of Letraset, that would have been Compacta, and I quite like that 60s font. I have a digital Compacta, so I tried that.
And when that didn't quite work for me, all the rest. Then, when they didn't work, online to Typekit and download every, and I mean every, font they have.
Set up the words "Stephen Spicer Art" in each one. Some are easily eliminated, but many are not.
Here's the first short list: 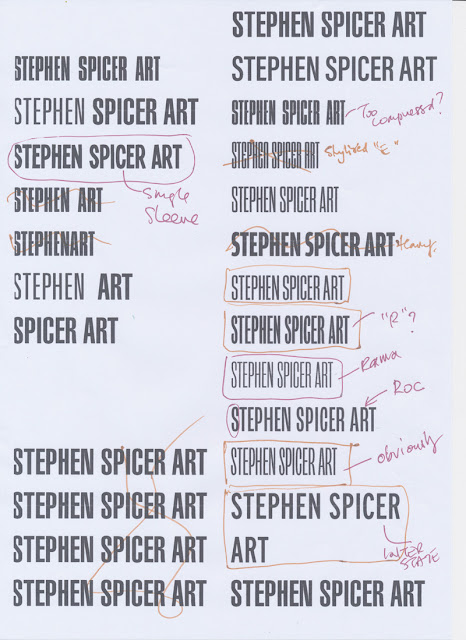 What's becoming clear is that I'm worrying about the shape of the uppercase "S". On Many of these fonts it's quite angular, and I want a more cursive one. (By this time I'm about 90 mins into this operation.)
I eliminate some and then put the type into blocks as you can see below. I'm now nearly two hours into this and getting frustrated with myself for fretting about very small details. 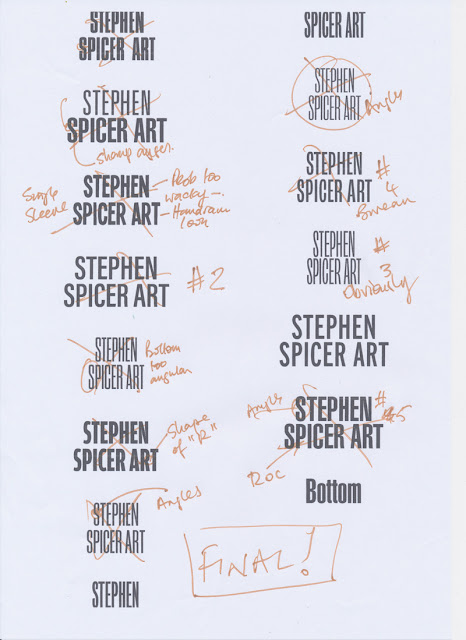 I force myself to compare one with the other. Eventually I end up with "Interstate", no doubt inspired by the clear typography on US roads. It comes in 36 weights.
I'm not a big fan of Adobe TypeKit fonts. You only have them for the length of your CC subscription. Since I'm planning to wind that down over the next year or so, it's not a good policy to base long term projects on. Still, I'm just using it for this time so it's OK. I'll no doubt rework it (and the website) if I decide to keep it.

I can't make it work still. Close, but no cigar...  Then I realise that if I use the word "Artist", not art, then it becomes easy.

So type is set up in Illustrator. There's some tracking and kerning needed but it fits, and nearly three hours in I want it to end.
Here's the type in Illustrator. Currently it's RGB black. You can see the type controls. 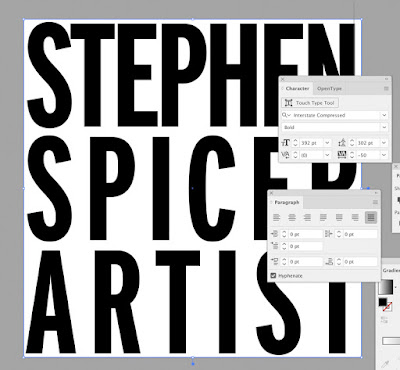 Next stage is to make it white and add a black outline for clarity. Except this won't be an outline, it will be an inline to preserve the shapes. If you compare the two following screenshots you can see how the true outline makes the letter spacing go awry.Once again, getting bogged down on detail...

Now to add a bit of colour. Added the red to the name and tested. It's a bit overpowering and send the wrong message: 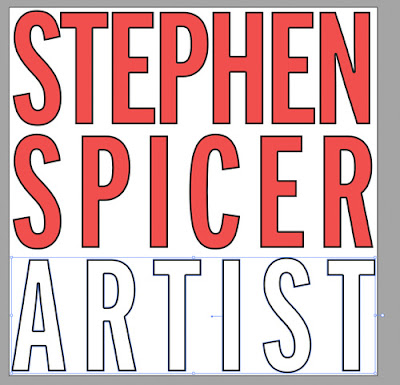 Swapped them over. Fed up with the time this has taken, but pleased that I care enough. Used this version - almost!
Have, for the moment shrunk it a little. Works well on mobile, still not that good on Desktop. But that's a problem for another day. 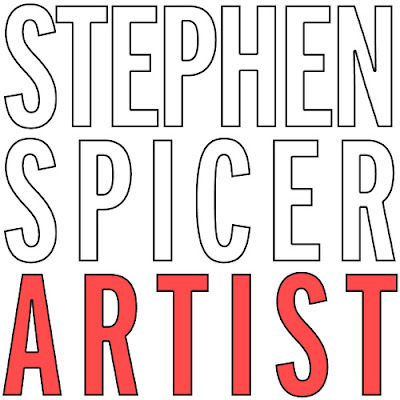 Posted by Steve Spicer at 10:02 No comments:

Collaborating with other artists

Collaboration, we are told, and it's probably true, is a good thing. It's hard for people like me, who are used to being a bit of a loner; but generally it can be observed that the product is better for it.
Not everyone's input is useful. Collaboration amongst equals - or close to equals is good, but you can't really do good work if there is a big gulf in understanding or skill sets.
I know that's open to a lot of criticism, but everyone has an opinion; however, often these are not fact based and today often parroting someone else.

TO BE COMPLETED
Posted by Steve Spicer at 12:00 No comments:

So for assessment we have to do a research folder/pdf. Last time I submitted three loose leaf folders. That works for me since most of my notes are sketchbook or scribblings. I don't type much, it takes too long and it's not vital enough. Besides which I agonises over the typography.
This time around it has to be a PDF, I have no problems with PDF. In fact I once certified as an 'expert' in Acrobat/PDF. Adobe said there's lots of work for people who really understand PDF, and there was only one other certified expert (ACE). Never got a single job out of it...

I'm using InDesign to generate this. I've set up a book document to hold all the sections and each section is separate InDesign document. That way it's easy to see what you have done - or not done. At the moment there's about 150 pages, which will generate a huge PDF - I will have to use severe compression to get that down.

At the moment I'm sorting through pictures. I have about 1000 I've taken over the last six months, and I need some as evidence. There's more to come, these are just the one from the phone.

In case you're wondering the pictures are from a small show of automata at Broughton-on-the-Water. They have little red question marks because I've moved them and InDesign has lost the link. 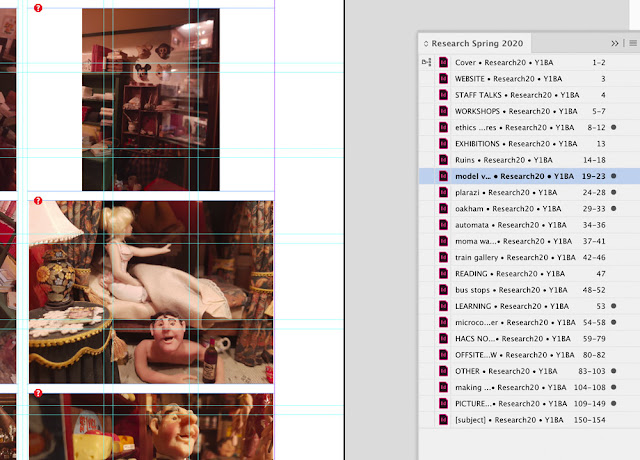 Posted by Steve Spicer at 12:19 No comments:

Stuff in the past